Laser beam expanders increase the diameter of a collimated input beam to a larger collimated output beam for applications such as laser scanning, interferometry, and remote sensing. Contemporary laser beam expanders are afocal systems developed from well-established optical telescope fundamentals. In such systems, the object rays enter parallel to the optical axis of the internal optics and exit parallel to them. This means that the entire system does not have a focal length.

There are two categories of refracting telescopes: Keplerian and Galilean. A Keplerian telescope consists of lenses with positive focal lengths separated by the sum of their focal lengths (Figure 1). The lens closest to the object being viewed, or source image, is called the objective lens, while the lens closest to the eye, or image created, is called the image lens.

A Galilean telescope consists of a positive lens and a negative lens that are also separated by the sum of their focal lengths (Figure 2). However, since one of the lenses is negative, the separation distance between the two lenses is much shorter than in the Keplerian design. While using the effective focal length of the two lenses will provide a good approximation of the total length, using the back focal length will provide the most accurate length.

The magnifying power, or the inverse of the magnification, of a telescope is based upon the focal lengths of the objective and eye lenses:

In a laser beam expander, the placement of the objective and image lenses is reversed. Keplerian beam expanders consist of two lenses with positive focal lengths separated by the sum of their focal lengths. They offer high expansion rations and allow for spatial filtering because the collimated input beam focuses to a spot between the objective and image lenses, producing a point within the system where the laser's energy is concentrated (Figure 3). However, this heats the air between the lenses, deflecting light rays from their optical path and potentially leading to wavefront errors especially in high-power laser applications.

When using the Keplerian or Galilean designs in laser beam expander applications, it is important to be able to calculate the output beam divergence. This determines the deviation from a perfectly collimated source. The beam divergence is dependent on the diameters of the input and output laser beams.

The magnifying power (MP) can now be expressed in terms of the beam divergences or beam diameters.

When interpreting Equation 4 and Equation 5, one can see that while the output beam diameter (D0) increases, the output beam divergence (θO) decreases and vice versa. Therefore, when using a beam expander to minimize the beam, its diameter will decrease but the divergence of the laser will increase. The price to pay for a small beam is a large divergence angle. Laser beam divergence is specified in terms of a half angle, which is why a factor of 2 is required in the second term in Equation 6.

A beam expander will increase the input beam and decrease the input divergence by the Magnifying Power. Substituting Equations 4 and 5 with Equation 6 results in the following:

Beam expanders increase the beam area quadratically with respect to their magnification without significantly affecting the total energy contained within the beam. This results in a reduction of the beam’s power density and irradiance, which increases the lifetime of laser components, reduces the chances of laser induced damage, and enables the use of more economical coatings and optics.

Although it may seem unintuitive, increasing the diameter of a laser using a beam expander may result in a smaller beam diameter far from the laser aperture. A beam expander will increase the input laser beam by a specific expansion power while decreasing the divergence by the same expansion power, resulting in a smaller collimated beam at a large distance. Laser beam expanders can also be used in reverse to reduce beam diameter rather than expanding it. This will invert the magnifying power, but divergence will be increased.

Compare this to the beam diameter without using a beam expander by using Equation 6.

Using a 10X beam expander reduced the output beam diameter 100m away by over a factor of 5 when compared to the same laser without a beam expander.

Spot size is typically defined as the radial distance from the center point of maximum irradiance to the point where the intensity drops to 1/e2 of the initial value (Figure 6). The focused spot size of an ideal lens can be calculated by using wavelength (λ), the focal length of the lens (f), the input beam diameter (DI), the refractive index of the lens (n), and the beam’s M2 factor, which represents the degree of variation from an ideal Gaussian beam. Figure 6: Spot size is usually measured at the point where the intensity I(r) drops to 1/e2 of the initial value I0

Spot size is fundamentally determined by the combination of diffraction and aberrations illustrated by red and blue, respectively, in Figure 7. Generally, when focusing laser beams, spherical aberration is assumed to be the only and dominant type of aberration, which is why Equation 11 only takes spherical aberration into account. In regards to diffraction, the shorter the focal length, the smaller the spot size. More importantly, the larger the input beam diameter the smaller the spot size.

By expanding the beam within the system, the input diameter is increased by a factor of MP, reducing the divergence by a factor of MP. When the beam is focused down to a small spot, the spot is a factor of MP smaller than that of an unexpanded beam for an ideal, diffraction-limited spot. However, there is a tradeoff with spherical aberration because it increases along with the input beam diameter. Most commercial lasers specify an output beam diameter of the laser at the aperture with a tolerance that is often on the order of 10% or more. For many laser applications, a specific beam diameter is required at the end of the system. A variable beam expander can be inserted into the system to compensate for variability between individual laser units, ensuring that the final beam diameter is consistent for all systems.

When choosing a beam expander for an application, certain criteria must be determined in order to achieve the correct performance.

The mechanics used to focus a beam expander or change the magnification of a variable beam expander are typically classified into two different types: sliding and rotating. Rotating focusing mechanisms, such as threaded focusing tubes, rotate the optical elements during translation. They have a lower cost than sliding focusing mechanisms due to their simplified mechanics, but they create the potential for beam wander due to the element rotation (Figure 8).

Figure 8: Exaggerated illustration of the beam wander that may be caused by rotating focus mechanisms

Sliding focusing mechanisms, such as helicoid barrels, translate the internal optics without rotating them, thus minimizing beam wander. However, this requires more complex mechanics than those of rotating focus mechanisms, increasing system cost. Poorly designed sliding optics may also have too much freedom of movement in the mechanics. While the pointing error in these poorly designed designs will not rotate when adjusted, it will be larger than for rotating optics or correctly designed sliding optics. Figure 9: Unlike transmissive beam expanders, the curved mirrors of this Canopus Reflective Beam Expander expand the incident laser beam. The holes on the side of the beam expander are integrated mounting features Examples of the application of the Galilean telescope design to laser beam expanders can be found in several Edmund Optics products, all of which can be used to collimate and focus laser beams. Our TECHSPEC® Arcturus HeNe Beam Expanders is a simple two-lens design, consisting of a negative lens and achromatic lens. Drawing of the internal optical elements is shown for reference. 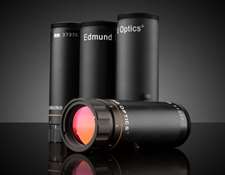 Our TECHSPEC® Draconis Broadband Beam Expanders improves upon the simple two-lens design with a proprietary multi-element lens design that enhances its ability to create a collimated or focused laser beam diameter at a long working distance. 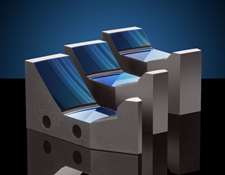 The patent pending TECHSPEC® Canopus Reflective Beam Expanders are easily mounted due to a variety of integrated alignment features. They feature broadband performance with minimal wavefront distortion from the UV to Infrared from 250nm to 10μm. Their monolithic structure provides performance stability independent of changes in temperature. 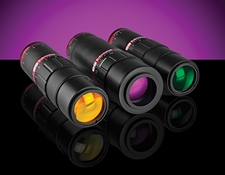 Our TECHSPEC® Research-Grade Variable Beam Expanders can continuously adjust magnification and divergence while keeping a constant overall housing length. They are ideal for prototyping, R&D, and other applications requiring magnification adjustment.

View our selection of beam expanders to determine the best fit for your application.

Let Edmund Optics do the hard work for you! Determine the spot size of our lasers and laser diode modules by just inputting your working distance.

Knowing which beam expander is right for your application can greatly improve system efficiency. Learn about the different types and how to create your own custom design.

Learning Has Never Been So Fun